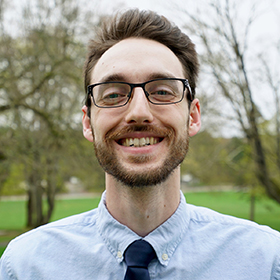 Chris Coble joined Serge in 2016 and served amongst British South Asians in Harrow, U.K. (2016-2018), just four months after completing his undergraduate studies in Strategic Communications at Elon University. Chris loves working alongside people from all over the world and treasures the time he spent in London building up culturally-contextualized church plants. He has a heart to minister to people from Hindu and Muslim backgrounds and doesn’t mind a semi-spicy dish of curry.

In Fall 2018, Chris returned to the states to pursue further theological education to better equip him for a lifetime of ministry, with the hope of returning to the field upon graduation. While attending Gordon-Conwell Theological Seminary in South Hamilton, MA, he will be a member of the Mobilization division with Serge as a Regional Representative in New England. He is excited to serve with Serge in a new capacity, as an ambassador first to Christ, and then to the organization.

Chris thoroughly enjoys thoughtful questions that get to the heart of what people long for, as a means of pointing them to Christ. He loves inviting people into community as much as he loves challenging North Americans to consider a season or lifetime pursuing international missions in hopes of bringing the beautiful message of the gospel to the nations.