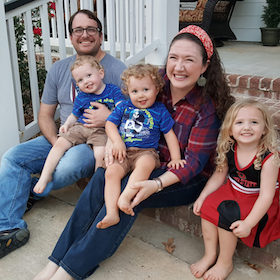 Eric and Jericho fell in love talking about medical missions in 2001. Eric grew up in Southern Ohio and Southeast Texas, and Jericho in Northern Louisiana and Central Mississippi. They met at Evangel University in Biology 101 as freshmen in the pre-med program.During their four years of undergraduate study, friendship grew into romance. Their shared passion to serve in the fray through health and spiritual care was the spark that lit the flame of their relationship. During their first year of medical school, they married and continued their pursuit of the Lord and His calling at the University of Mississippi Medical Center (UMMC). After medical school Eric trained in emergency medicine, and Jericho chose a combined residency in internal medicine and pediatrics.Upon completing residency training, Eric and Jericho joined the faculty at UMMC and invested the next six years in caring for patients and teaching medical students and residents. During that time, they had three kids in two years! In 2015, they began sensing the Lord's nudge to go and were led to Serge and Litein, Kenya. The Bells hope to start a new team in Litein, where God has big plans! They will move with their three children - Grace (4) and twins, Peter and Nathaniel (2).The Kenyan leadership at Litein Hospital has big dreams, too! They have asked for the Bells' assistance in building their training programs. As Eric and Jericho join Litein's staff, the hospital plans to partner with Kabarak University to become a training site for their Family Medicine residency program. Eric and Jericho hope to train and disciple residents and interns, building capacity for local healthcare providers to care for the sick and the poor in Kenya while sharing the love of Christ. Find out more about the Litein Team.