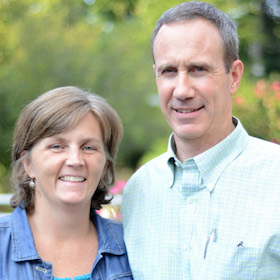 The Berry family moved to Costa Rica in 2001, and from there to Lima, Peru, in 2002. In Lima they supported nationally led church planting movements; planted a church that, by God's grace, is now nationally led and self-sustaining; and oversaw the founding of a home for abused teen moms and their babies called the House of Glory (La Casa de la Gloria). Since 2013 they have based in the U.S. facilitating partnerships for the House of Glory.For the Berry's five children, Emmett ('97), Anna ('99), Taylor ('00), Abigail ('02), and Hadassah ('08), Perœ is home.Mark was born in Maryland, graduated from high school in Massachusetts, and later graduated from college and business school at Vanderbilt University in Nashville, Tenn. He graduated from Covenant Seminary in St. Louis, Mo., in 1999. Mark is an ordained minister in the Presbyterian Church in America.Lori was born in Nashville and grew up in Little Rock, Ark. After graduating from Auburn University, she returned to Nashville to work for the Arthritis Foundation. Mark and Lori met and were married at Christ Community Church in Franklin, Tenn., where they both served on staff working with youth and college students. They were married in November 1996.Mark and Lori rejoice in the opportunity to minister again in Latin America and be part of Serge's efforts to mobilize teams and resources to support nationally led church planting movements fueled by the gospel of grace throughout Central and South America.