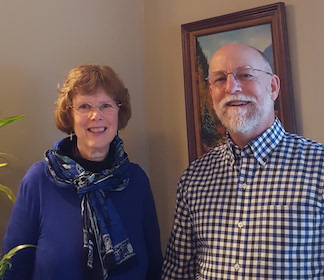 Mark set out for a night of partying with a serviceman buddy one night in 1979. He and a friend had to hide from a drug dealer, and the only "safe" place to hide was a Christian Serviceman's Center. In this place the Holy Spirit met Mark and changed the entire course of his life. He found the truth of Colossians 1:13-14: that He (God) delivered us from the domain of darkness and transferred us to the kingdom of His beloved Son, in whom we have redemption, the forgiveness of sins.In 1981 Mark moved to Philadelphia, PA, where he met a pastor who modeled genuine faith and Christian living in the context of urban poverty. Mark worked in the neighborhood church for several years. He managed a thrift shop and helped refugees from all over the world. This experience had a lasting impact on Mark's desire to care for poor and vulnerable people and to help them know the love of Christ Jesus. While in Philadelphia, Mark met and married his wife, Sarah, who worked as an ESL teacher.Mark and Sarah moved to Colorado in 1987 for Mark to study at Sangre de Cristo Seminary. While in seminary, the Cary's were introduced to Serge via the early Sonship material, which shaped their thinking and ministry. He was ordained in 1990. Mark and Sarah have served in a variety of churches in the US. Beginning 1998 they have been developing relationships in the Czech Republic, both in short-term missions and by spending the year 2001 living in CZ as missionaries. In 2013 they were invited to be part of a Sonship week in Brno, Czech Republic.Mark and Sarah have two adult children.