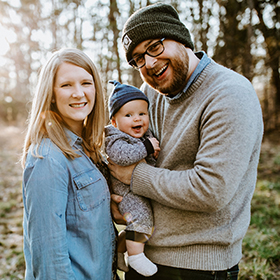 Scott and Becca Brand met while attending Covenant Theological Seminary in St. Louis, as they both pursued their Masters of Arts in Counseling. Prior to St. Louis, Becca had served as a Serge apprentice in southern Europe and then a recruiter for long-term missionaries with Serge. Scott had worked as a youth and worship director at a church in Orlando, Florida.Becca was raised in Winston-Salem, North Carolina, and graduated from UNC Chapel Hill with degrees in Spanish and Sociology. As a daughter of a PCA pastor, she grew up with several sweet connections to the Serge family and their work overseas. Scott grew up in Columbus, Ohio, in a family that valued the work of missionaries both in the United States and abroad.Scott and Becca were married in October of 2016, and their shared desire to go overseas and serve cross-culturally in Europe drew them into conversations with the Ireland team. After a few visits to Ireland (including during the chilly, rainy months of January and March no less!), they both sensed a call to ministry in Ireland. In November of 2018, they welcomed their first son Lewis into the world.

They will be working with summer interns and apprentices in Dublin and serving alongside and under local Irish pastors to share the Gospel. They are excited to see what God is already doing among the Irish people, how the gospel is being spread throughout the Republic of Ireland, and to join their gifts to what is happening there.