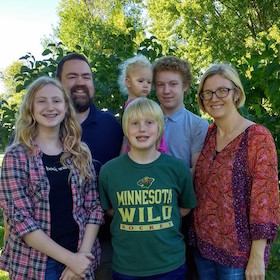 Scott and Colleen are preparing to move to London to help start a church in a multi-ethic community. Their hope and compelling desire is to one day see brothers and sisters from varied background and ethnicities worship the Lord as one body in the church and to continue the process of growing disciples.Scott and Colleen met at Taylor University in Indiana their freshman years. After three years of friendship, Colleen finally realized just how cool Scott was and they started dating. Senior year they got engaged before Colleen left the country to study in Lithuania.They survived and grew through the separation and were married and graduated from Taylor in 1998. Scott graduated with a major in Biblical Studies while Colleen majored in Sociology and International Studies. They then moved to New Jersey where Scott served as a Director of Christian Education and Colleen taught at a preschool.In 2000 they headed back to the midwest to Dubuque, Iowa, and UDTS Theological Seminary. Scott earned an M.Div. and served as the student pastor for two small churches in rural Iowa.In 2004 they moved again when God led them further west to Little Rock, Iowa, where Scott has served as the pastor of an Evangelical Presbyterian Church for more than 13 years. Along the way the family grew to include four amazing children. Colleen has enjoyed staying home with the children and also running an online business selling handmade stained glass.International mission work has always been close to both Scott and Colleen's hearts, as they see sharing the gospel as a natural outpouring of God's love. Over the last few years, they have felt God leading them directly toward international ministry, and with much prayer have reached the point where they can not turn away from His call.They also see how God has moved in their lives and prepared them for this calling, giving them a growing passion for the hurting and a global awareness. They seek to follow God's lead and pray they can reach out and minister to those God puts in their paths with His grace and love.