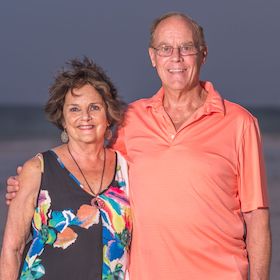 Stu and Ruth Ann Batstone became part of Serge in 1990 after a career founding and managing a company of Christian bookstores. Stu joined Serge as a mentor at about the same time that Ruth Ann became a counselor. Since then Stu has continued to use the Sonship curriculum to mentor couples and individuals who serve as church planters, pastors, missionaries and leaders. He has been the mentoring team leader, and is now an advisor for the Gospel Mentoring and Discipleship Lab programs. Stu has an M.A. and an M.Div. from Trinity Evangelical Divinity School in Deerfield, IL.Ruth Ann continues to be a counselor in private practice and is the author of Moving On: Beyond Forgive and Forget. She is also a staff member and curriculum consultant for Parakaleo, a ministry to the wives of church planters both in the U.S. and internationally. Ruth Ann has an M.S. in Counseling Psychology.Stu and Ruth Ann frequently teach seminars for Serge on Cultivating a Gospel-Centered Marriage, Cultivating Gospel Transformation of the Heart, and Cultivating Gospel Centered Parenting. They enjoy leading retreats on the topics of repentance and forgiveness. They have been privileged to speak in many venues in Africa, Russia, Japan, India, several European countries, Costa Rica, China and South America as well as in Canada, Mexico and 25 states in the USA.Married since 1965, they have four married children and twelve amazing grandchildren. They try to walk or bike daily, and they like to vacation on Cape Cod annually. They also enjoy travelling any where in the world for ministry, which gives them opportunity to enjoy may different peoples and much of God’s beautiful and diverse creation.