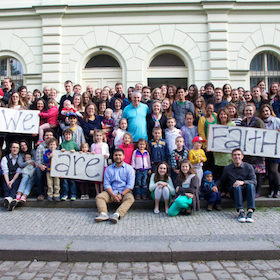 Faith Community Church in Prague, Czechia, was planted in April 2007 by Uptown Church in Charlotte, N.C., in partnership with Serge. Serge missionaries Phil and Shanna Davis led a team of five adult missionaries that launched the church in a café which was owned in part by a Czech church. After two months the church moved to a smaller, cheaper facility owned by another Czech church in the same neighborhood.

In its first year, the church grew to approximately 50 people in attendance, sometimes swelling to more than 80. Today more than 100 people worship with Faith Community on a given Sunday and the current meeting space is maxed out.

The church has targeted a newer, larger facility to allow them to:


The monthly rent is very affordable and can be covered by the church budget, however the space requires one-time renovation work to be useable. This project has a funding goal of $183,000, which will be used to help Faith Community take this key step toward becoming a solid gospel presence in the city. Please consider partnering in this exciting phase of Faith Community's growth.