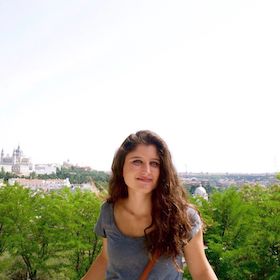 Anelise grew up in Santiago, Chile as a missionary kid to parents who are third culture kids themselves. Her dad was raised as a missionary kid in Peru, and her mom’s parents immigrated to the U.S. from Cuba due to political turmoil in the 1960s. Her parents have been serving as missionaries with Mission to the World since 1985. She has four siblings, who are spread across the U.S., except her sister with whom she currently lives with in St. Louis.

Anelise received the call to missions when she was 15, after meeting a missionary who did frontline anti-trafficking work in Greece. She hadn’t heard of missions in different contexts other than church planting and pastoring. She decided to pursue a degree in Community Development at Covenant College and graduated in 2018. Throughout mission trips in college that she took to Spain and Nicaragua, she came to realize that she wanted to empower and disciple individuals, along with addressing people holistically - first and foremost, spiritually and emotionally, and potentially in the future, financially.

She was introduced to Serge after they visited Covenant College and had friends and family say incredible things about Serge after going on missions trips with them. As she began exploring Serge’s grace-oriented theology and core values, she became convinced that this was the mission organization that she wanted to pursue. She is ecstatic about serving as a London apprentice in September 2021 [Lordwilling!], and looks forward to sharing the gospel with people of all cultures and backgrounds, being discipled under Sonship, and mentored by missionaries.