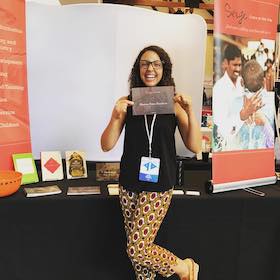 Ashley serves with Serge's Home Office team as Mobilization Manager, supervising the Serge Apprenticeship Program and Serge Internship Program. She is also the recruiter for East Africa teams and Missionary Kid Teachers. Ashley enjoys walking alongside individuals as they discern their next steps and calling.

Ashley was born and raised in Charlottesville, Va. In February 2008, she visited Uganda for the first time on a short term missions trip. While there she worked with a focus in children’s ministry. She then returned on two more trips in 2009 and 2010.

Ashley graduated from Samford University (Birmingham, AL) in 2014. She graduated with a degree in Early Childhood/Elementary/Special Education.

In May 2015, Ashley served with Serge in Bundibugyo, Uganda as a teacher to children of missionaries for two and half years. While there, Ashley was able to learn and work in ministry with children through teaching and discipleship.

In June 2018, Ashley moved to Philadelphia, PA to begin working in the Home Office with the Mobilization team.