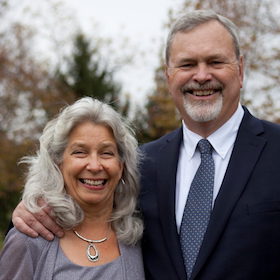 Bob was born and raised in Massachusetts. After graduating from the University of Massachusetts with a degree in psychology in 1979, Bob spent a term with the Peace Corps in Kenya. He remained in Africa after completing his term, transitioning into a leadership role in relief and development work with UNICEF.In 1982 Bob returned to the U.S. for a brief period to complete a master's degree in international and cross-cultural administration and to marry Nancy, a fellow Peace Corps volunteer. Nancy was born and raised in Virginia, and they joke about having a cross-cultural marriage.Together, they returned to Africa where Bob continued working in relief and development efforts with CARE holding various senior leadership positions in Mozambique, Kenya and Uganda. Nancy worked as a teacher in Maputo’s International School and shifted her attention to raising a family when their two children, Leigh and Brian were born in Kenya.Bob came to Christ through the witness of Christian missionaries they met while living in Africa. Nancy rededicated her life to Christ after experiencing the impact of Bob’s dramatic conversion on his life and in their marriage. They moved back to the U.S. in 1991. Bob began serving as Executive Director of the Charlottesville, VA affiliate of Love INC (In the Name of Christ), a ministry seeking to mobilize local churches for mercy ministry. Seven years later, Bob took a position as Director of Missions and Ministries at Trinity Presbyterian Church, where he served for four years.In 2001, Bob and his family moved to the Philly area when Bob joined Serge (then World Harvest) as U.S. Director. In June of 2005, the Board of Directors appointed Bob Osborne to be the mission's next Executive Director. In addition to opening up their home for numerous Serge hosting opportunities, Nancy worked for 16 years as office manager of a local non-profit providing expert breastfeeding services to families from all income levels.

Bob has been a student of non-profit leadership all of his life. He has a passion for seeing the Kingdom advance through the power of the gospel changing lives of believers and unbelievers. He loves investing in the lives of young people through coaching and mentoring. He also enjoys coaching Christian non-profit executive directors and board chairs. He and Nancy share a passion for racial reconciliation and long to see the church embrace a unified voice across racial lines.

In addition to keeping up with their two out-of-state married children, Bob and Nancy enjoy hosting people in their home for meals, drinks around the campfire and maybe even a game of cornhole. With Nancy’s 2020 retirement, they look forward to more opportunities to serve Serge’s local and overseas staff, board members and donors together.