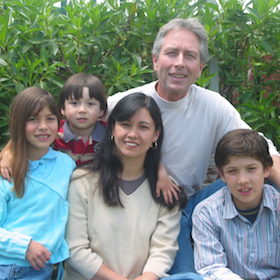 In 1990, newly transformed by the power of the gospel and miraculously delivered from alcoholism, Brad, a former construction supervisor, went on a short-term mission trip to Chile. This experience changed the direction of his life forever as God used the lives and love of the Chilean people to touch his heart and place in him a burden for the lost souls of that country and the needs of the poor Chilean churches.Brad returned to Chile in 1991 as a full-time a missionary with a heart for evangelism and the experience and skills in construction to serve the huge needs of the churches. That same year, God brought Margarita, a Chilean missionary, into his life and united them in marriage. As a couple they combined their gifts to work in an MTW church plant in the small farm town of San Pedro and develop a nation-wide ministry of church-construction, evangelism, children's ministry, and family-life seminars. Brad has organized and directed over 50 short-term missions teams on 30+ projects throughout Chile and other countries.The Wallaces joined Serge in 1999 and were the first Serge missionaries in South America. As team leader of the Serge Chile team, Brad established a long-term Serge presence there by recruiting other families to join the work full-time. In 2012, with a vision to expand the reach of their work, and a desire to be reunited with their oldest two adolescent children studying in the U.S., the Wallace returned to the States where Brad is now working in the role of Missions Team Facilitator for Serge recruiting and coordinating short-term missions teams to support the work of Serge teams around the world.The Wallaces have 3 children: Joshua (1995), Keila (1998), and Michael (2003).