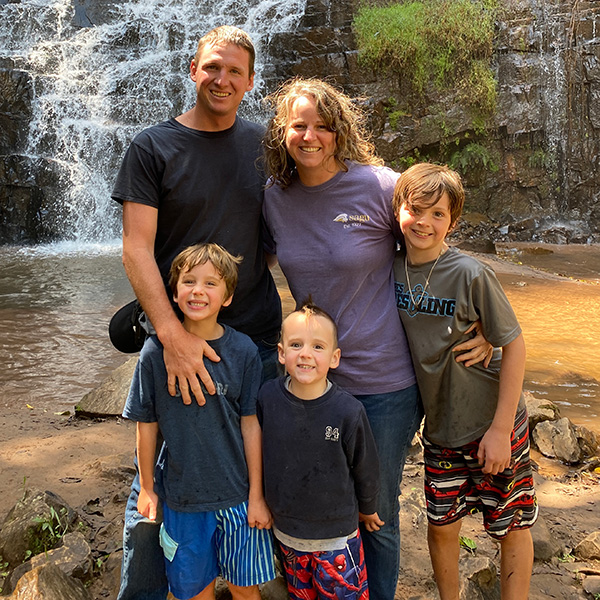 Caleb and Krista are currently serving with the Serge team (www.mccropders.com) in Kibuye, Burundi. They are using their skills as an engineer and a nurse in contribution to the team's effort of training medical professionals and providing excellent medical care in the name of Christ at Kibuye Hope Hospital.

After growing up in Kenya as missionary kids, Caleb and Krista have always felt the call to return to Africa one day. The two met in boarding school in Kenya during their early high school years, but their love story didn't start until 15 years later. During that in-between time, both graduated from high school and spent a few years at different Bible schools before reuniting at the University of Illinois Urbana-Champaign in 2003 for their undergraduate degrees. Krista majored in International Health and Caleb studied Civil Engineering.

After graduating from UIUC, they parted ways yet again, still mere acquaintances. Krista moved to Chicago to start a graduate nursing program at University of Illinois-Chicago and Caleb moved to Michigan to start graduate school in the Upper Peninsula. As part of Caleb's graduate program, he spent two years in Uganda doing research from 2008-10. During that time, Krista also returned to Africa as a volunteer nurse in Mozambique. Finally, after journeying parallel lives for many years, they reconnected in Chicago at a mutual friend's home in the summer of 2011 and their eyes were opened! They were married soon thereafter.

In 2013, they both took and passed their professional board exams; Caleb became a licensed professional engineer and Krista became a licensed pediatric nurse practitioner. They spent a few years gaining professional experience in the States before moving overseas in 2015. They have three young boys, Liam (2013), Gavin (2016), and Jono (2018). As a family, they are pursuing God's call to care for the"least of these" in the impoverished, post-war nation of Burundi.

Caleb is primarily working with local engineers, architects, and tradesmen to build and renovate the hospital. Krista is busy raising the boys, dedicating most of her time towards their education at the moment. They enjoy working alongside and empowering the local structures in both the hospital and the church, as they live out God's calling on their lives.