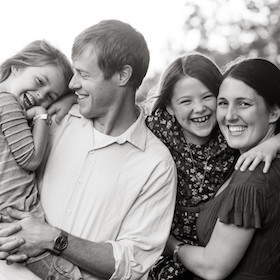 From the time she was a little girl, Arianna wanted to serve as a doctor in Africa. She and David met at Furman University where David was a religion major and Arianna was majoring in Perspectives on Poverty and Health. Once David warmed up to the idea of "running around the jungle with a coffee pot" (after a pivotal year in Turkey, Greece, Italy, and the Dominican Republic) they started dating and married three weeks after graduation.Medical dreams however, require a lot of school and the next 12 years were filled with medical school at Wake Forest University, a pediatrics residency, a chief resident year, and a pediatric emergency medicine fellowship at University of Alabama at Birmingham. During a year as Luce Scholars in Pingtung, Taiwan, devoted to studying culture and medicine, David started a wonderful accidental career as a wedding photographer.In 2013, the Shirks took a three-week trip to Kijabe, Kenya, to a mission hospital on the edge of the Great Rift Valley. The entire family fell in love with the work and people, and moved to Kenya long-term in fall 2014, as part of the Samaritan's Purse post-residency program. They are thrilled to join the Serge team in 2016 and continue to serve at AIC Kijabe Hospital as long as the Lord allows.Arianna cares for little ones in the Pediatric ICU, wards, and NICU and trains the newest generation of Kenyan doctors and physician assistants during their rotations at the hospital. She is working to co-found the first pediatric emergency medicine and critical care fellowship in East Africa. David serves in Resource Mobilization for the hospital. His work is made up of a combination of storytelling, photography, and donor relations. It's a perfect fit after years as an artistic small business owner. Their daughters Madeline ('05) and Annabelle ('08) love attending school at Rift Valley Academy.Find more details of their life at: www.shirkadventure.com.