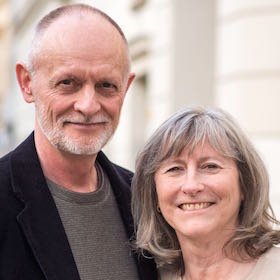 Dr. Dennis and Cynde Morgan are invested in ministry in Vienna, Austria, where they are serving on the New City Wien (NCW) church team. They are focused on leadership in the church, outreach, and mercy ministry. Dr. Morgan is now elder emeritus at NCW and uses his expertise as a clinical psychologist to serve the city through life coaching/discipling, missionary care, life mentor and coaching trainings for Christian workers (www.cmentorprogam.com), and consulting with a ministry to women in forced prostitution. Cynde is involved in outreach through leading the NCW Outreach Team, providing individual discipleship meetings, missionary care, and relationship building with former prostitutes through the Hope for the Future and Herzwerk ministries. She also coordinates visiting teams from the US which have provided the children’s program for the annual NCW church retreat.

Dennis and Cynde met at Abilene Christian University and married in 1975. Dennis completed his master's and doctoral degrees in Clinical Psychology at Rosemead School of Psychology, Biola University, and his MATS degree at Reformed Theological Seminary. Cynde received her master's degree in counseling from Cal State University, Fullerton and completed advanced coursework in school psychology and has used those skills to serve students at the International Christian School Vienna.

Dr. Morgan has been a practicing clinical psychologist for over 30 years, serving the Christian community, and was formerly a graduate school professor training Christian psychologists and counselors. He has authored several published books (available at Amazon.com), including his recent human nature related book, What Keeps Us Ticking, used in his training of Christian workers in Vienna. Cynde has worked as a school counselor and in various administrative positions in higher education, as well as having home schooled their two now adult children. She also previously served in the position of high school principal at International Christian School Vienna.

Dennis and Cynde's connection to Vienna extends over nearly 20 years, having made annual short-term missions trips to Vienna for more than a decade before being blessed to relocate there.