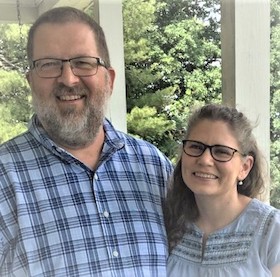 Why would a predictable, stability-loving couple choose to leave the serene mountains of western North Carolina for a bustling city of over eight million people where more than 300 languages are spoken? The answer is that the world lives in London and God has given Gary and Ashley a vision to invest long-term in building His Kingdom there.Before they married in the autumn of 2003, they had separately served for various lengths in Amsterdam, Belize, Kosovo, and London. Ashley also served for two years in Senegal. They both served as Serge summer interns in Ireland. They deployed in 2015 to London as full-time staff, helping to lead an apprenticeship and internship program in London.

In 2018, they shifted to new roles providing administrative support to UK Area Directors, Bob and Keren Heppe. Having had careers in management, administration, and sales, Gary and Ashley draw from these rich life experiences while using their gifts to help mission goals and visions become practical, sustainable realities.

Actively participating in and contributing to the multi-ethnic ministry of New City Church in Shepherd's Bush has been a living picture of the Gospel at work throughout their years in London.