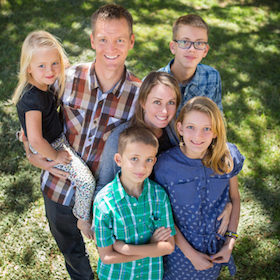 George and Susan live in the remote village of Kibuye, in the rolling hills of Burundi, East Africa, with their four children Jonah, Matea, Micah, and Alma. They are part of a team of physicians, engineers, teachers, and others whose work is centred around Kibuye Hope Hospital, a 150-bed facility offering some of the best care in the country to some of the poorest in the country--and training medical students to be able to do more of the same in the future.George works as the administrator of the hospital--working alongside Burundian colleagues to ensure the hospital can support the level of care and training that being offered and grow to attain even more in the coming years. Susan works with hospitalized children, using play to help them recover in a more holistic fashion by being the hands of Jesus to the sick, injured, and malnourished children who find themselves in the hospital.Originally from Edmonton, Canada, the Watts came to Burundi after four years in France where George earned a Ph.D. in business administration. Prior to that, the Watts have lived, worked, and studied in Canada, France, USA and Kazakhstan.