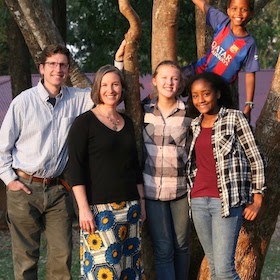 The Sund family, Greg, Stephanie, and their three children: Ella ('04), Piper ('05) and Biniyam ('09) first served in Kibuye, Burundi, through a nine-month internship beginning in Fall 2014. Greg was the only anesthesiologist on a team of medical missionaries at Kibuye Hope Hospital, which is a teaching hospital that serves a rural area of Burundi. After support raising and language school, the Sunds returned to Kibuye in the fall of 2017 where they continued to serve until 2020. In the summer of 2020, the Sund family transitioned to the Serge team at AIC Kijabe Hospital in Kenya where Greg continues to train physicians and nurse anesthetists.

Greg grew up in Vienna, Va. He attended the University of Washington and earned a B.A. in Near Eastern Languages and Civilizations. He then attended medical school at Mount Sinai School of Medicine followed by training in anesthesiology at Virginia Mason Medical Center in Seattle. He completed a cardiac anesthesia fellowship at Emory University.

Greg has made multiple short-term medical mission trips and has seen first-hand the value of medical education in underserved areas. His desire is to help raise up a generation of well-equipped East African physicians and non-physician anesthetists. Greg taught anesthesia and critical care medicine to medical students and nurse anesthetists for Hope Africa University in Burundi. He is now working in Kenya to train and disciple physicians and non-physician anesthetists who come to Kijabe from several countries in East Africa where there are severe shortages of qualified anesthetists to provide safe anesthesia.

Stephanie grew up in Wilmington, Mass. She attended Messiah College in Pennsylvania where she received a B.S. in Nursing. Stephanie worked for eight years after graduation as a nurse on a cardiac unit, first in Baltimore and then in Denver. She served as a traveling nurse in Seattle. Stephanie worked in Burundi at the hospital as a lactation consultant in addition to teaching the missionary kids at Kibuye Hope Academy.