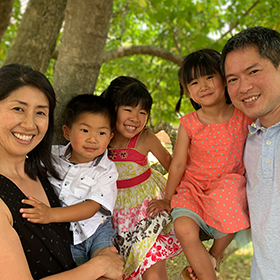 Jason and Ai are serving in a church-planting team in Urayasu City, a bedroom community of Tokyo in Chiba Prefecture, Japan. The church plant, Shin-Urayasu Grace Church, is a partnership between the Presbyterian Church in America and the Presbyterian Church in Japan.Jason was born in Singapore and immigrated to California when he was eight years old (he became a U.S. citizen in high school). Since childhood, Jason has been interested in Japan. Following college, he moved to Japan to work in the software industry. Little did he expect that he would be saved by God while living there (a country where Christians make up less than one percent of the population)! He felt the call to gospel ministry after volunteering as phone counselor in Tokyo and returned to the U.S. to attend seminary. During seminary, his eyes were opened to church planting while a summer intern at Oyumino Presbyterian Church in Japan. He graduated from Westminster Theological Seminary (MDiv.) in 2012. He was ordained in the PCA in 2017.Ai was born in Japan. She grew up in the church (Presbyterian Church in Japan) and attended a Christian preschool located providentially near her home. She accepted Jesus Christ as her Savior when she was in high school. Her desire to give children a Christ-centered education led her to study early childhood education at Covenant College. After graduation, she moved back to Japan and taught in Christian schools, including starting the Japanese track at Covenant Community School International, a school founded by Oyumino missionaries. That is where she and Jason met, and they married a year later, in 2009.Jason and Ai have three children: Kanae (2011), Clare (2013), and John Yuji (2015). They have participated in summer and short-term mission trips to Japan since getting married, including aiding earthquake recovery efforts following the 2011 Tohoku earthquake. They are excited to share God's Good News with the people of Japan as Serge missionaries.