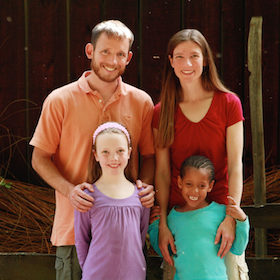 Both Jason and Heather Fader sensed that God was preparing them for medical missions even as children - Heather in Wisconsin, and Jason in Kenya, where his parents were medical missionaries.Jason and Heather met as students at Calvin College in Michigan, and they were married shortly after graduating. Then, while Jason was in medical school at Loyola University Stritch School of Medicine in Chicago, Heather completed a Master of Arts in Teaching and enjoyed teaching at the high school level. They moved to Ann Arbor, Michigan, for Jason's residency in general surgery. In 2005, their daughter Anna was born, and in 2009, they adopted Abigail. It was also in Ann Arbor that they met two other families from their church who similarly felt called to medical missions. The three families decided to begin working together to serve God as one team.From 2009 to 2011, the newly-formed team cared for patients and also taught and discipled Kenyan residents at Tenwek Hospital in Kenya. Two more doctors joined the group just as the team began searching for a place to work long-term. Looking for a place to train African medical students narrowed the search ultimately to Kibuye Hope hospital in Burundi. To prepare for teaching medicine in French, the group moved to France in 2012 for a year of French language study.At last in 2013, the team moved to Burundi, in Central Africa, to be the clinical teaching faculty for medical students who attend the medical school at Hope Africa University. Jason, the assistant medical director for Kibuye Hope Hospital, is one of about 10 general surgeons in the country of Burundi. This calling is an opportunity of tremendous potential to train and disciple African medical students who will be leaders of this underserved, impoverished, post-war nation.Jason and Heather look forward to investing the next few decades of their lives, God willing, into the lives of this African doctors-in-training. Their work in Burundi can be followed on their team blog at mccropders.com.