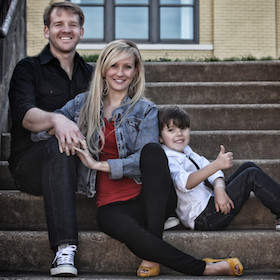 From East Tennessee to East Africa, God made a seemingly winding road perfectly straight. Jason and Ree'L grew up together in Appalachia and both attended East Tennessee State University. Following undergraduate studies, they pursued master's degrees (M.S. in Biomedical Sciences at Texas Tech for Jason and an M.B.A. at Georgia Tech for Ree'L).

From 2005-09, Jason attended Medical School at the University of Tennessee, where God used a trip to Sudan and leaders at an inner-city clinic to point him to a life of mission. Simultaneously, Ree'L started a career in business consulting. In 2007, the two finally tied the knot.

Jason completed an Internal Medicine and Pediatrics residency at Los Angeles County Hospital, serving one of the largest underserved populations in the country. Also during this time, God led Ree'L to serve with Union Rescue Mission on Skid Row, while she was on sabbatical from her previous consulting work. In 2012, they welcomed a then three-year-old Sylis into their family.

Throughout the years, God provided short-term opportunities in Sudan, Haiti, Nicaragua, and Malawi to lay the foundation for long-term service. Jason and Ree'L served in Chogoria, Kenya for over 2.5 years, at a rural, mission hospital. They are now humbled at the privilege to share the love of Jesus through their work with Serge at AIC Kijabe Hospital, Kenya.Learn more about Jason and Ree'L's work in Kenya here.