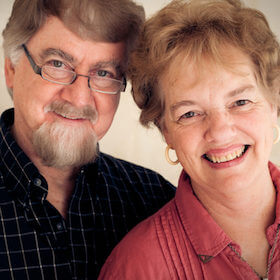 Johnny and Becky met in the Late Jurrasic period at Belhaven University in Jackson, MS. For their first date, Johnny, the consummate big spender, walked Becky to prayer meeting at the First Presbyterian Church. That evening, they discovered a shared call to missions and the rest is history.After their wedding in June 1965, Becky taught elementary school while Johnny studied, graduating in the first class of Reformed Seminary in 1968. After a period of youth ministry in Virginia and south Florida, they served in Kenya as church-planters with World Presbyterian Mission of the RPCES from 1973-77, then returned to pastoral ministry in Mississippi and Alabama.In 1990, they attended Serge's Sonship Week. Johnny says he went looking for a tool to change others but found that it was he who needed changing! This began an ongoing journey of Gospel renewal during which the Longs began sharing the concepts of living by grace with their church (Altadena Valley PCA in Birmingham) and with other area pastors.In 1992, Serge recruited the Longs to return to Africa, and from their base in Nairobi, Kenya, Johnny developed Sonship for Africa: Discipling God's Disciplemakers which has been translated into Amharic (for Ethiopia), French (for West and North Africa) and Malagasy (Madagascar). The Longs recruited a Renewal Team of three other families which trained national discipleship trainers-pastors, university and seminary students and missionary teams in seven African nations.In 2003, Serge asked the Longs to relocate to London to develop renewal materials for the UK. Their 12-lesson Grace4Life course is finding ever-increasing use in churches there and in Europe.In June 2011, the Longs relocated to the US where Johnny serves as Serge's Cross-Cultural Renewal and Leadership Development Specialist. He and Becky continue their writing and teaching ministries in East and West Africa, Madagascar, the UK, and most recently in 2012 have traveled to teach in Chile, Spain and Ivory Coast (West Africa). They are available for men's conferences (renewal and leadership training), women's conferences and as missions conference motivational speakers.