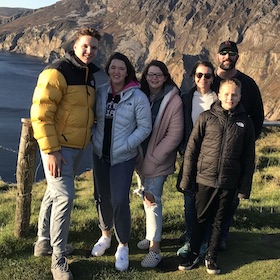 Marc and Liz met, married and moved to seminary all within a year’s time in 2000. After seminary (MDiv (2004), Reformed Theological Seminary in Jackson, MS), Marc and Liz served with RUF (Reformed University Fellowship) for 5 years, first in Colorado where they planted a new work, then onto Oklahoma to help revitalize another. He sensed a call to pastor in a local church and accepted a call to become the pastor of Hope Church in Hot Springs, AR. While pastoring there, he sensed his need to be further equipped and trained in counseling, so they moved to St Louis, MO, where he obtained his degree (MAC (2016) at Covenant Seminary. Liz also received her MAC the following year in 2017.

While Liz was finishing her MAC degree, Marc was working as a counselor in private practice and sensed a call back into pastoral ministry and began seeking a call. While they waited (and waited) on a pastoral call, Marc and Liz wondered, and began praying, if a position wasn’t opening because God intended for them to go “elsewhere,” not knowing what that meant. They felt an openness to go wherever God was calling them. Not soon after this, they heard of Serge Ireland’s desire to find a team leader to begin a new work in Belfast, N Ireland. As they had lived there in 2002-2003 while serving as a pastoral intern at a local Irish church, they were excited to hear more about this opportunity.

Throughout the interview process, Marc and Liz became further convinced and convicted that God was calling them (along with their now 4 children) back to Belfast to begin this new work. In the spring of 2018, Marc and Liz accepted an appointment to move to Belfast, N Ireland to work alongside local Irish pastors and churches through pastoral mentoring, teaching and training lay leaders, and evangelistic initiatives for the sake of gospel renewal. In conjunction with this work, they long to see reconciliation among divided communities through missional living, church planting and involvement with other local ministries through outreach and counseling.

Marc and Liz have four children: two boys, Josh (’01) and Hudson (’09), and two girls, Campbell (’04) and Anna (’06), and a dog, Bella, and cat, Theo. Marc is an avid golfer while Liz is an avid runner. Consistent with their own personalities, Liz seems to get “there” quicker while Marc prefers enjoying the scenery!