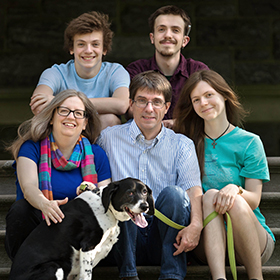 Marc grew up at New Life Church in Jenkintown in the years when World Harvest Mission was being launched, and comings and goings to Ireland and Uganda were part of ordinary church life. During those years he saw people being transformed by the gospel of grace, and that same grace got hold of him, too. Marc and Susan met in InterVarsity at the University of Virginia and were married in 1992.

Marc served three years on staff with IVCF and then completed an M.Div. from Westminster Seminary in 1997. After ten years working at Arcadia University, he was called to join the pastoral staff at New Life (now Glenside), and ordained in the Presbyterian Church in America (PCA). After twelve years as an assistant and associate pastor at New Life, Marc joined the staff of Serge in 2019.

Marc serves from the Serge home office as Global Learning Program Leader, and in that role is excited to be connected to the movement of God’s kingdom through many people in many places. He wants to see missionaries, pastors, and others involved in ministry empowered by the gospel to live lives of great freedom in dependence on Jesus for everything. Marc and Susan have three above-average kids, Nathaniel, Maggie, and Owen.