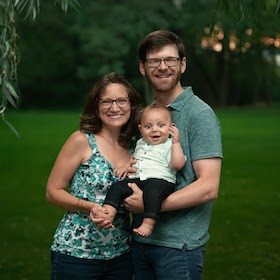 Growing up in rural central Pennsylvania, Matt learned from his parents the fullness of sacrificial service as he watched his parents run a radio station dedicated to spreading the gospel. At Covenant College, in Lookout Mountain, GA, he followed God's call to serve him through computer science, having embraced his gifts in that area. Since graduating in 2003, he has served at his father's radio station, in Christian higher education, and then at a Christ-centered medical center in north Philly. God moved him to Serge in 2019 as the Data Science Manager, putting to use Matt's focus on data engineering and analytics. He is excited to synthesize Serge's various databases into a cohesive system, enabling teams to work together more effectively and give leadership strategic insights. Matt and his wife, Jen, met during high school in a church youth group. After college, God brought them together again, blossoming their friendship into a romance, and they were married in 2008. Jen has served as the executive and program director of their church's English as a Second Language program, blessing many immigrants in Northeast Philadelphia. Since 2019, she pours herself into caring for their son, Ezra.