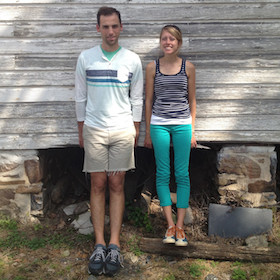 Matt's connection to Serge began in early childhood when his father led a short-term team to build some of the Mission's first housing in Bundibugyo, Uganda. After graduating from Covenant College with a double major in History and Philosophy, Matt served with Serge from 2004-06 as a teacher in Bundibugyo. He lived in a house which, incidentally, his dad helped build 15 years earlier.While serving in Bundibugyo, he learned a lot about humility, service, and teamwork in a challenging ministry environment. Following his term in Bundibugyo, he transitioned to working in the Mobilization Department as a short-term recruiter from 2006-07. Matt studied American history in graduate programs at the University of Notre Dame and University of Rochester from 2007-12. He spent a year at the University of Pennsylvania as a Research Associate in the McNeil Center for Early American Studies from 2011-12. In May 2012, he returned to the Mobilization Department and began in July 2012 to serve as the Mobilization Director.Matt's call reflects his long history with the mission. As someone formed profoundly by his time in Uganda he hopes to serve the Mission by shepherding folks towards the field. Not only to help them realize their calling, but also to care for the needs of our current missionaries, so that Serge can flourish with robust teams, enabled to heal, equip, and preach the gospel of Christ's Kingdom to each other and to the world.