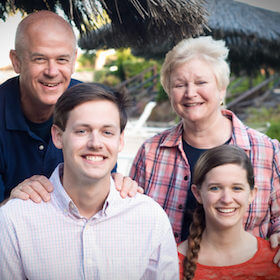 Meredith and Sandy were both raised in Virginia, and came to Christ in their teenage years. They met during their college years, when Meredith was attending the University of Virginia and Sandy James Madison University.

After college Meredith worked as an accountant until 1985, when he went overseas as a Bible smuggler to communist Eastern Europe. Sandy was in social work in northern Virginia, until 1984, when she started studying counseling at Westminster Seminary. After seminary, she worked for the Christian Counseling and Education Foundation.

At the very end of 1989, Meredith left Europe and moved to Pennsylvania to court Sandy. They were married in September 1990, after knowing each other a mere 15 years. In late 1990, Meredith began working in accounting for Serge.

In 1996, they left Serge and moved to Hungary to help oversee missionary teams with another agency, moving to Austria in 1997. In 1999, they rejoined Serge, doing the Sonship course with folks in central Europe.

They returned to the U.S. in 2002, and Meredith is now Associate Team Leader of the Member Care team, seeking to provide the resources and care our personnel need to work overseas. Sandy provides spiritual direction and care for several overseas staff.

Meredith and Sandy have two grown kids: Joshua and Emily.