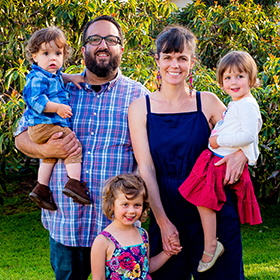 Mike grew up north of Los Angeles and attended The Master’s College where he got his degree in Business with an emphasis in Christian Ministries Administration. In the next 10 years, he served in churches outside of San Francisco, Dallas and Philadelphia, eventually moving to San Diego to work as the Community Life Director at a Christian college. In 2015 he started working at Harbor City Church, overseeing Finance, Administration, Volunteers and Children’s Church and began working towards a Master’s degree from RTS.

Kacie grew up in San Diego and graduated from Chico State University with a degree in Humanities. She had a passion for travel and did a semester abroad in Ghana. Feeling called to women’s health, she moved back to Ghana for a year to apprentice with a midwife at a village birth clinic, and later volunteered as a doula in the US. Kacie went back to school to get her bachelor of science in nursing and spent 8 years working as an RN at Sharp Mary Birch Hospital for Women and Newborns.

Feeling God’s love for the foreigner, they ran a ministry to pregnant refugee women out of their garage. During this time, they contemplated if God was calling them to missions in Africa.

After visiting close friends serving in Congo with Serge in 2018, the Forrests felt their call to missions. Mike will be working as the Chaplain at Christ School and helping with administration at the WHM-Uganda NGO, and Kacie will work with the nurse midwives at the hospital in Bundibugyo.