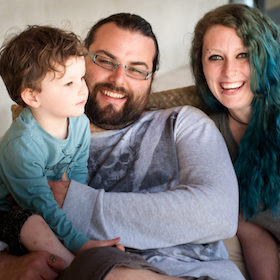 Oli & Constance Smith are repeat offenders when it comes to church planting. Between them they have been involved in planting five churches on both sides of the Atlantic, and they don't plan to stop anytime soon. They have served full time with Serge since 2007 & 2010 respectively (both having prior ministry experience). Together they have been part of several church planting teams, as well as a short stint with the London apprenticeship program, training, mentoring and supporting young ministers on the ground. Constance is from Asheville, NC and Oli is from Bedfordshire, England. They have been married since 2011, after bonding over a shared love of dark beers, zombie comedies, Batman and the call to meet the challenges of post-Christian culture with reimagined evangelism, prophetic service and deep discipleship. In 2014 their son Thaddeus joined the ensemble; he is presently preparing for a career as an astro-geologist.

Currently Oli & Constance are planting a church in an area of East London called Walthamstow, a religiously, ethnically and economically diverse area that encompasses traditional working class residents alongside an emerging arts scene and long-standing immigrant communities. They hope to create a community that invites strangers to the gospel into God's family and the hope that comes with the love of Christ. They are moved by God's call for justice for the poor and marginalized and the vision of a holy city where all nations have been healed (Revelation 22), and are focused on organic and sustainable growth for the long-term.

Constance is heavily involved with serving the homeless, helping out with local community care initiatives, and making art.

Oli is part of gospel renewal work, helping a small network of independent churches across London think through issues of mission, evangelism and strategy. He is also a student of theology alongside his regular community and pastoral work.