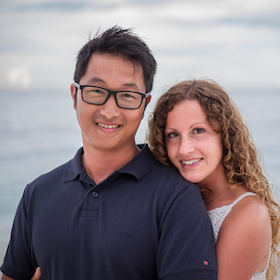 Oong and Elena met in London and were married in 2016. Oong completed Serge’s two-year apprenticeship in 2015 has since been serving with the Shepherds Bush team and at their church plant, New City Church, as a pastoral assistant. Oong is actively involved in weekly street outreach, discipleship, leading worship, regularly preaching and overseeing the Serge apprentices and interns working in Shepherds Bush. Elena works as a Montessori school teacher during the week.

New City Church is located in London’s Shepherd’s Bush, a community that is both economically and ethnically diverse with large numbers of immigrants from around world. The church and the Serge team seek to minister to the marginalised minorities through its mercy ministry, evangelism and multi-ethnic worship.

Oong is originally from South Korea but came to London as a child. Elena is originally from Italy and studied theology there before coming to London in 2010 to serve at a seminary where they met. With Oong being a 2nd generation British-Korean, and Elena, now a typical Londoner, they naturally have a heart for the next generation of Londoners, be they British—Iraqi, —Japanese, —Italian, —Korean, etc., to know and follow Christ.

New City Church is one of the few churches that are intentionally building a home for these diverse peoples who do not have a church that they can really call home. Through the work of the Shepherds Bush team and New City Church, Oong and Elena pray that God will continue to reach people of a variety of backgrounds - different ethnicities as well as different economic statuses.