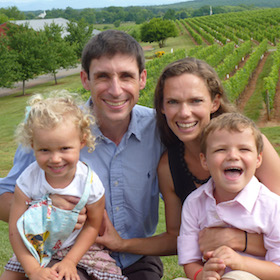 After getting married in 2010, Anna and Patrick moved to San Diego. There Patrick completed a residency at University of California - San Diego in combined Internal Medicine and Pediatrics and Anna worked as a Family Nurse Practitioner in a diverse clinic.They both had felt a call to work to restore spiritual and physical health in the developing world, so accepted a two-year position with World Medical Mission/ Samaritan's Purse's Post-Residency Program.In Fall of 2014 they moved back to Virginia with Luke (born in 2012) to have their second child, Miriam, before moving to France. After six months of language school in Albertville, France, they moved to the northeastern Democratic Republic of Congo (DRC) to work in a former mission hospital that had been destroyed in 2002 and was in the process of rebuilding.From 2015-17 they worked alongside their Congolese colleagues to care for extremely poor and sick patients in a Congolese Christian and government referral hospital. Patrick functioned as the head of the internal medicine department and consultant for pediatrics, and Anna worked part-time in internal medicine and part-time teaching at the nursing school.Luke and Miriam flourished in the Congo, learned French quickly and spent their days climbing mango trees and searching for guavas with their friends. Anna and Patrick plan to return and work in the DRC as long as God wills, and look forward to being a part of a Serge team on mission for God's glory.