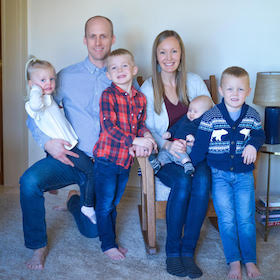 Peter and Kristin both grew up in Minnesota and began dating while attending college at Bethel University. Peter was finishing up his final year of undergraduate studies and applying to medical school and Kristin was studying to become a Registered Nurse. While Kristin was completing her degree, Peter subsequently started medical school at the University of Minnesota in 2009. After Kristin graduated as a RN in 2011, they married at their childhood church. Upon completion of medical school, they moved to Rochester, Minnesota where Peter completed a residency in Pediatrics, a Chief Resident year and started on staff as an inpatient Pediatrician in the Mayo Clinic Children’s Center. During medical school and residency, Kristin worked as a RN while also taking care of their expanding family that now includes four children – Charles (‘14), William (‘16), Hattie (‘17) and Henry (‘20).

Both Peter and Kristin have had a vision for living and serving internationally which they have shared since dating. Each of their families have adopted siblings from the Philippines which initially exposed them to medicine in under-resourced settings and sparked an interest in global child health. Through subsequent short term trips and after much prayer and consideration, they are following God’s lead to a long term life of medical service. They are starting their work through Samaritan’s Purse post-residency program and will transition to Serge for long-term support. Doors have been opened for them to live and work at AIC Kijabe Hospital in Kijabe, Kenya. Their children will attend Rift Valley Academy for schooling.