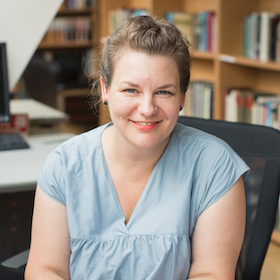 Rebecca has a B.A. in Mathematics and worked as a Computer Programmer from 2008 through 2016. She has served as a singer and song-writer at her home church in Louisville, Ky., since 2004. She has co-led community groups and facilitated a women's study of systematic theology. Rebecca always expected to be a "sender" rather than a "sent one," but in 2010 began to have a growing interest in the people and culture of East Asia. She went on a short-term trip to central China with her church in 2013 to discern if God was leading her to make a change. From there, she began a several year journey that ultimately led her to Japan.In the Spring of 2017, Rebecca moved to Nagoya, Japan to serve as a Serge apprentice with Christ Bible Institute (CBI). From 2017 to 2019 she was able to study Japanese and serve in various capacities while trying to discern how she could serve there long-term.

Through the internship, the Lord began to reveal ways Rebecca could use both her background in web development and music in service to His Kingdom. Rebecca is planning to work with CBI’s Joy of Japan Center to develop web sites for churches and ministries in Japan. She is also hoping to continue using her background in music to serve the local church, to connect with the community, and to encourage other musicians and song-writers in Japan.