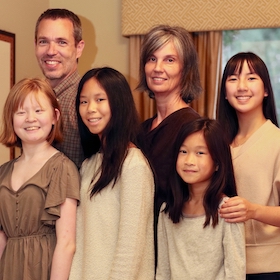 Rick and Anne met in 1989 at Westminster Presbyterian Church in Atlanta, GA when they were in college and high school, respectively. After Anne graduated from Wake Forest University, they married and moved to Orlando where Rick began his MDiv at Reformed Theological Seminary and assisted in planting River Oaks Church in Lake Mary. Throughout Rick’s time in seminary and the ensuing ten years, Anne worked as a Human Resources Consultant in the banking industry. After 4 years in Orlando, Rick received a call to be an Assistant Pastor at University City Presbyterian Church in Charlotte, NC.

They adopted their first daughter, Olivia, in 2003, and over the next several years, adopted 3 more daughters from China. Rick became the Senior Pastor of UCPC/StoneBridge in 2004 and served there until December 2019. During his time at StoneBridge, Rick led and transitioned the church from an internally to externally kingdom focused ministry, establishing numerous ministry partnerships within the city of Charlotte, supporting church planting networks both in the States and abroad, and building a residential, English speaking school in India.

Through a series of events, God began to make his will clear that it was time for Rick to use his experience and gifts in a new way to serve God’s kingdom. Both Rick and Anne, separately, felt as if God may be calling them to international work. One aspect of ministry that Rick always loved was coaching and mentoring other pastors and church planters, and when God led him to the opening at Serge for a pastor mentor/coach role in Vienna, it resonated with his passion to serve and assist other pastors in their own gospel calling.