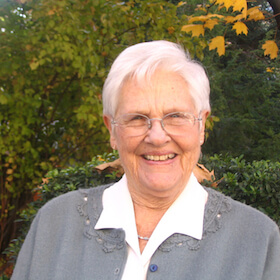 Rose Marie Miller was born to German parents in 1924, and grew up in San Francisco, California. She graduated from the University of California at Berkeley, then from the Bible Institute of Los Angeles, and in 1950 married Cecil John "Jack" Miller.In 1964, Jack joined the faculty of Westminster Theological Seminary as professor of evangelism. They moved to Philadelphia, Pa., where they continued raising their five children. Over the years they took in many troubled people and Ugandan refugees and saw the power of the gospel change many lives. This led to the start of New Life Church in 1973, and in 1979 their first trip to war-torn Uganda.In 1983, World Harvest Mission, now called Serge, was born. Sonship was launched as a training curriculum to help missionaries understand and live out the gospel. Rose Marie's career as a teacher and speaker began to take off, in both the U.S. and abroad. Her first book From Fear to Freedom was released in 1994 and remains in print today.In 1996, Jack passed away; her mentor, partner, and friend. The Lord has given her the strength and grace to continue her speaking ministry without him, and she currently spends most of her time in London, serving with Serge's Southall team, building friendships and sharing her faith with Asian women in London. Rose Marie remains active with a family that includes 24 grandchildren and 40 great-grandchildren, and counting. Her second book Nothing Is Impossible With God was released in the fall of 2012. She co-authored a study called The Gospel-Centered Parent that was released in 2015.