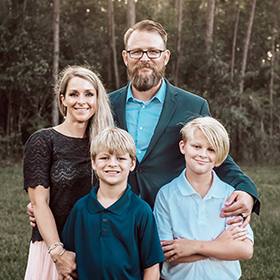 Russell and Amanda met in Augusta, Georgia in 2001. Russell grew up in the Atlanta area and graduated from Toccoa Falls College (Bachelor of Biblical Studies, minor in Classical guitar from UGA) in 1999. Amanda grew up living in both the US and Europe being the daughter of an Army dentist. She graduated from Augusta State University (Bachelor of Business Administration) in 2001. Having been discipled in Sonship, they both share a deep passion for the gospel and helping others see the joy of knowing Jesus. This has led them to invest their lives in full-time gospel ministry for nearly 20 years serving in youth ministry, young married ministry, pastoral ministry, and church planting. In 2002, Russell and Amanda were married. Shortly after, Russell adopted Amanda's son Ashton who is now 22. Several years later they had two more sons, Knox (11) and Watts (9).

In 2008, Russell earned his Masters of Divinity at Columbia International University and was ordained in the PCA in 2010. After serving on the senior leadership team at Pinewood Presbyterian Church for four years, in 2014, Russell and Amanda were sent out to plant a church in Jacksonville, Fl. Through this journey, God has prepared and called them to long term missions in Ireland. Having a strong passion for church planting and having experienced first hand the benefits of facilitative church planting, Russell and Amanda are excited and eager to support church planters, new church works, and to see gospel renewal in Dublin Ireland.