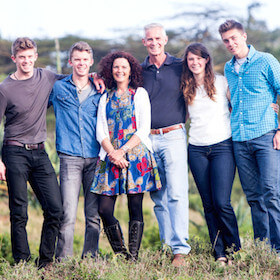 The Myhres are missionary physicians who joined Serge (then World Harvest Mission) in 1991, and have worked in East Africa since 1993: 17 years in Bundibugyo, Uganda; eight years in Kijabe and Naivasha, Kenya; and now back in Bundibugyo since January 2019.Their role includes both “coaching” and “playing”. First, they serve as East Africa Area Directors for Serge, supervising teams in Uganda, Kenya, Burundi, the Democratic Republic of Congo, Malawi, and South Sudan (on hold currently). Second, they both serve as doctors to provide compassionate and excellent health care and training in the name of Jesus, reaching the vulnerable throughout East Africa. Currently they are also leading the Bundibugyo team and managing Christ School. Their children Luke (’93) married to Abby, Caleb ('95), Julia ('96), and Jack ('98) call Africa home as they finish training and education and embark upon their own lives.Scott grew up in Cincinnati, Ohio, and Jennifer in Sterling, Va. They met at the University of Virginia. Following graduation Scott attended the University of Cincinnati School of Medicine while Jennifer received her medical degree from Johns Hopkins. They were married in 1987.Scott chose to serve the poor at Cook County Hospital in their family medicine residency, and then worked in a church-based, inner-city clinic while completing a certificate in Biblical Studies from Trinity Evangelical Divinity School. Meanwhile Jennifer completed her pediatric training at Northwestern University's Children's Memorial Hospital. During a one-year study sabbatical in 2001 they both received Masters in Public Health degrees from Johns Hopkins School of Public Health.For more than two decades they have sought to follow the example of Jesus in neglected areas of Africa by healing, teaching, and preaching the good news of the Kingdom, and drawing others alongside them to do the same.Scott and Jennifer have combined curative and preventive care by working in the hospital, participating in health management, and promoting community health, focusing in the areas of HIV prevention, newborn survival, and childhood nutrition. They have invested heavily in the training of emerging indigenous leaders, and have conducted research to better understand and address health issues in their area.

Both consider it a joy to minister to Jesus by caring for the least (in the world's eyes) of His children, and by prayerfully supporting the expansion of the Kingdom through relationships with Serge teams.