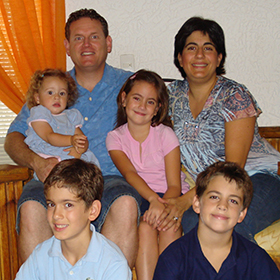 The Phillips family has been working in Vilassar de Mar (Barcelona) since October, 2000. They have four children: Sebastian (2000), Stephen (2001), Naíme (2003), and Sofía (2008).Stephen grew up mainly in San Diego, CA. He was born into a Christian family and professed faith at the age of 7, but rebelled in his teenage years until the Lord got a hold of his life at the age of 18 while a student at Liberty University. Shortly after this he felt God calling him to the mission field. Naíme was born in Hermosillo, Mexico. She grew up Roman Catholic, but the gospel powerfully entered her family when her mother was converted when Naíme was 10. Naíme understood and embraced the gospel shortly afterwards. Although she was active in her local church in Mexico, she had no idea that missions lie in her future until she met Stephen.Stephen and Naíme met in Mexico in September of 1998 and were married 6 months later. After their honeymoon they moved to Escondido, CA where Stephen was finishing his seminary education at Westminster Seminary in California. After graduating with an MA in Theology, he began a full-time internship at Grace Bible Church which later became their sending church.After a year as an intern, the Phillips' church sent them to do a trip to Spain in order to explore long-term ministry opportunities. Their hearts settled on a new work recently started 20 miles north of Barcelona in a town called Vilassar de Mar. The Phillips' went there with the purpose of consolidating this newly formed church plant. By God's grace over the years the church in Vilassar has grown and in 2005 had the privilege of planting a new work in Barcelona.Stephen co-pastors the church in Vilassar and enjoys preaching, discipling and evangelism. His hope is to see the church strengthened so that it can continue to plant more new churches in the future. Naíme stays busy raising their four children, running the Sunday school program at church, as well as teaching Bible studies and practicing hospitality.