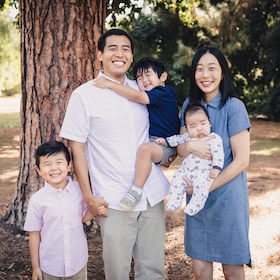 Ted and Eunice are serving in Burundi as medical missionaries with their children, Toby, Amos, and Timothy.

Ted was born and raised in southern California as a child of first-generation immigrants from South Korea. He was raised in a Christian home and received Christ when he was a high school student. He spent his college years at Rice University in Houston, Texas, during which God gave him a vision for missions through Urbana Student Missions Conference and short-term service trips to Kenya. Since then, God has continued to give Ted a desire for missions.

Eunice was born in San Jose, Calif., and grew up in southern California. She is also a child of first-generation immigrants from South Korea and was raised in a Christian home. During college and her young adult life, God gave her the opportunity to go on a couple of short-term mission trips to Mexico and Cambodia. Eunice also began working as a middle school math teacher in the west Los Angeles area.

While Ted was in medical school at the University of Michigan and Eunice teaching in California, God brought their paths together through a mutual friend. After a few years of long-distance dating, Ted and Eunice got married, and Eunice moved to Michigan while Ted continued in his general surgery residency at St. Joseph Mercy Hospital.

After completing residency, Ted and Eunice joined the Post-Residency Program at Samaritan’s Purse and got connected to a team of physicians at Kibuye Hope Hospital in Burundi. They attended language school in France for a year, before joining the team in Kibuye. Ted worked for two years as one of 20 general surgeons in the country of Burundi, providing surgical care to one of the poorest and hungriest nations in the world. He also taught and mentored medical students at Hope Africa University as well as young doctors participating in the one-year internship program.

After finishing their term with Samaritan’s Purse, Ted and Eunice returned to the U.S. with plans to transition to Serge and head back to Burundi as long-term members of the same team. They look forward to more opportunities to invest in, train, and disciple the next generation of African doctors.

Learn more about the Serge Kibuye team at wordanddeedafrica.com.