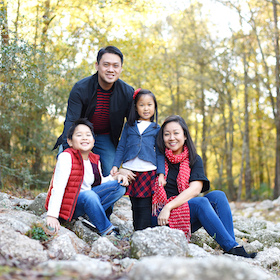 Tony and Judy will be serving in Kijabe, Kenya as medical missionaries with their children Austin and Hannah.Tony and his family arrived in the United States in 1979 as Vietnamese refugees after a harrowing escape story, including secret nighttime boat rides and separation of family and rescues by international ships. He grew up in Houston, TX, and later received Christ while attending college at Johns Hopkins University. During his junior year, he saw firsthand the need for missions when he went on his first mission trip to Ukraine with YWAM, and his heart for missions remained steadfast since.Judy's parents immigrated from South Korea and settled in Dallas, TX right before she was born. She was raised in a Christian home where missions was an almost routine part of life with yearly short-term trips to Mexico with her church starting in her youth. In her teenage years, she committed to long-term missions during a youth retreat, and God has reminded her of that promise several times since.God then wove their life stories together when they met in medical school in San Antonio. Their shared love of Christ and His body of believers, as well as their shared love of missions and service, drew the two together. After residency at Rush University Medical Center in pediatrics for Judy and at the University of Illinois Chicago in internal medicine for Tony, they moved back to Houston, TX where they were married in 2007. Judy began working for Texas Children's Hospital in a community hospital's NICU/nursery while Tony joined a large multi-specialty clinic. Recently Judy left hospital medicine to join a private practice.More than the work they did, their years post-residency were full of time serving at their church and building a community of believers who support each other and reach out to others. They were stretched as people with the birth of their two bright and joyful children, Austin and Hannah.They continued to heed God's call to missions through multiple short-term trips to SE Asia, Central Asia, and the Middle East while praying for God's long-term calling in their lives.To their surprise, God turned their attention to Africa when they had the opportunity to take their entire family to Kijabe, Kenya in 2016. They fell in love with the people, vision, and mission of the hospital to provide high-quality healthcare for God's glory. Judy and Tony will serve in their respective departments to train the next generation of African doctors and to mentor them to use their skills to bring the gospel of God's love to Kenya and all of Africa.