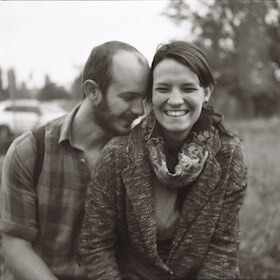 Karen (K.J.) Visky first went to Cluj, Romania, in 2006 as a summer intern while studying design in New York City. During that summer God revealed himself to her in new ways through the local teaching. In 2012 she joined the team on a short-term appointment to assist the indigenous, Cluj-based ministries and projects founded by Romanian-born Hungarians.She works with Genesius Association, an outreach/pastoral ministry to university students and young professionals, pursuing discipleship relationships and helping in planning and visioning. She also works with a contemporary art studio project, assisting the project manager on coordinating events, while building relationships with artists, instructors, students, and volunteers.Shortly after arriving in Cluj in 2012, K.J. met Zsolt and they were married in 2014. Zsolt, a Romanian-born Hungarian, grew up in Cluj and studied Hungarian Literature at Babes-Bolyai University in Cluj. After graduating in 2014, his focus has been developing professional carpentry skills while continuing to work on writing projects. In June 2015, Zsolt and K.J. were appointed to Cluj as long-term missionaries. They are excited about how God is now leading them to use their gifts in design and carpentry as mission among different communities in and around Cluj.